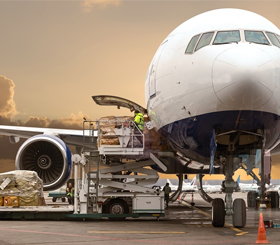 Our air freight carriers are dedicated to transporting your goods world-wide. If you need to move items urgently airfreight is the fastest solution.

Our most popular Air Freight services are:

Air freight is used to manage and control the flow of goods worldwide, including manufacturing from the source of production to the marketplace, or simply from one person to another,

If you would like Airfreight to transport your goods by air freight, please click get a quote.

Air freight is essential to the modern world. It underpins economic development on a global scale 1 and creates many millions of jobs. It is used to transport $6 trillion of industrial, consumer and personal items including parcels, boxes, pallets, containers, and vehicles and even provides next day delivery worldwide. Regarding value, globally the amount transported accounts for 35% of world trade; and in the UK it accounts for 38% of our trade with the rest of the world. Every year we send 328 billion letters and 7.4 billion parcels globally. However, airfreight accounts for less than 1% of global trade by volume.

The goods we ship by airfreight are changing, and that change is being driven in no small extent by e-commerce. We now send twice as many parcels as we did a decade ago 1. Retailers need to deliver to their customers quickly wherever in the world they are located. There is continual pressure to reduce costs and provide customers with good end to end tracking visibility of their goods, and instant notifications.

So how does this all pan out in the UK? Indeed, it keeps the cargo facilities at many UK airports busy. The distribution of airfreight across UK airports is hugely uneven, with the main players handling most of the volume. Here we drill down to the fine detail.

By tonnage transported, the busiest cargo airport in the UK is Heathrow which in 2017 handled over 1.69 million tonnes of airfreight. However, on a global scale, Heathrow is just the 19th largest; it is almost dwarfed by Hong Kong International, the largest airfreight handler worldwide which handled over 4.6 million tonnes during the same period.

But Heathrow cargo has big plans for the future; it aims to become the best European cargo airport and to increase its freight volume to 3 million tonnes a year by 2040 2, assuming that it is successful in building a third runway.

Currently, 36.4% of Heathrow’s cargo volume is with North America, 19.9% with East Asia, 15.6% with the Middle East and Central Asia, and 9.3% with Europe. Africa and South Asia are also significant players.

After Heathrow, the second busiest UK cargo airport is East Midlands International 3, which handles around 0.32 million tonnes a year. It serves as the UK DHL and UPS hubs and provides operations for Royal Mail and TNT.

Even though most of the airfreight entering and leaving the UK is handled by the four airports mentioned above, the role of the smaller players should not be underestimated. Each of them is an essential node in both the UK and global airfreight networks handling all forms of airfreight including vital services such as freight forwarding and next day delivery worldwide. Table 1 below lists every UK airport airfreight player 4.

These figures show freight carried by Heathrow is 64.7% of total freight and dwarfs the contributions made by the other 41 airports. In fact, the top four airports carry over 90% of all airfreight in the UK.

In this article, we have provided a great deal of detailed data on airfreight and airports. While not all of it might be directly relevant to you, we hope that it gives a good overview of the state of airfreight in the UK. Globally, the UK is a significant player in this field, and our contribution is poised to grow.  Whether you are seeking to send or receive a box, parcel, or pallet or take advantage of next day delivery worldwide, airfreight will be a vital growth engine 5 in our post-Brexit world.